Justine and her mother in 1967 Justine's mother, father and older brother (Leo in the book) in 1949.

Justine Hope Blau was raised in a family that moved through 24 hotels and apartments around New York City by the time she was 11 -- at which point she became a ward of the court and lived in group homes for six years. Books were her main refuge, bringing her to other worlds and perspectives, far beyond her circumstances. She continues to be passionate about storytelling.

For the past five years Justine has been teaching a memoir writing workshop at CUNY Lehman College in the Bronx. In 2020, she edited an anthology of her students' compelling memoir vignettes, My Slipper Floated Away, which is available for free on the CUNY Academic Commons.

Justine has sold and optioned screenplays and written three books, including her memoir, Scattered (Hand Whistle Press, 2012). Her nonfiction has been published in magazines and websites including Rolling Stone, Oprah Magazine, CBSNews.com and The Huffington Post. Justine has received fellowships from the New York Foundation for the Arts, Paramount Pictures and the Wallace Foundation. She holds an MFA in screenwriting from Columbia University's School of the Arts, has two grown kids (who can also tell a good story) and is obsessed with saving our democracy. 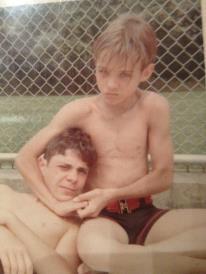 The boy on the right is Vic in Scattered. (Al "Butch" Neese in real life). He is younger in this photo than he was when I knew him at PCS. But he was already brash.

A biography of the author of "The Feminine Mystique" who helped found the National Organization for Women in 1966. Of it, School Library Journal said: "Blau weaves together clear descriptions of the social, political, and economic conditions of the 60s and 70s, a time ripe for changes on all fronts, with the highlights of this brilliant woman's personal and professional life."

Scattered
Scattered is Justine Blau’s account of growing up chronically homeless in ’60s era Manhattan with her delusional mother and her two older brothers. She finds unlikely salvation through relationships she builds in the tumult of a Westchester group home for children.

"The Writing's on the Wall"
Justine in Oprah Magazine
Justine on The Hairpin
WKCR interview
Justine on WKCR
Justine on the Huffington Post
Justine on Amazon.com
"Undertow of Summer" at Mr.Bellersneighborhood.com
Justine's essays as Visiting Scribe for the Jewish Book Council
Loading…}